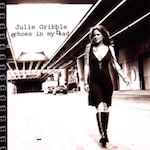 “Maybe I” From “Echos in my Head” Julie gribble 2007. I recorded, performed all elements and mixed for Julie’s 2nd record release. I also co-wrote with julie and the whole production was done in my home studio. I composed in Abelton Live5 with NI’s Kontakt2 and battery2. After the programming was mostly complete, I transfered the session into my ProTools HD3 system. There i recorded Julies vocal and my guitar and bass overdubs and finally the mix.

“Just Stay” from the album “So typical”, Julie Gribble 2005 Produced by Dan Lavery of Tonic, and recorded by engineer Arron Walk, these songs were cut at Westlake studios in Hollywood CA. They were recorded through an SSL 4000G, Neve 1073’s, La2a, 251 into a Pro Tools Mix system. Dan’s giutar od’s done on a Digi 02 at home. I mixed the first six album tracks on my then, ProTools Mix3 system in my home studio. The mix sessions were largely remote mix sessions. Dan Lavery only lived 15 miles away and never came to my studio but he simply didn’t need to because he absolutely loved the mixes from the first reference mp3 I emailed him. He really got into the remote mixing method because of the fact that he had other sessions going and a new child in his life. He loves it!