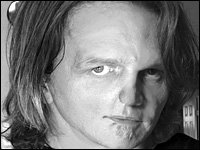 From the album “Car Bomb Opera” Judson Frondorf (2006) This is the most simply made album in the history of record production. Judson composed and recorded his entire 10 song set in Apple’s Garageband with the stock loops and various others from free sample’s sites.

He used absolutely no external equipment. Zero. None. Nada. Judson even used the built-in Powerbook mic hole in the Laptop for all his vocal tracks. Yup, you read it right. It really showcases the fact that even with the most extreme minimal setup, great results can be had. I mixed all ten songs from my ProTools HD3 system in my Humble Venice studio.

Since Judson lives in New mexico we mixed it remote style. He uploaded his Garageband sessions and audio files to my FTP server with his own private password provided for him and then downloaded and transferred the files into Pro Tools for the mixes. I emailed a couple mp3’s of the mixes until it met his liking and mastered the 10 songs, uploaded it back to Jud which he has made available on iTunes. xjudson is at http://www.ackackack.com